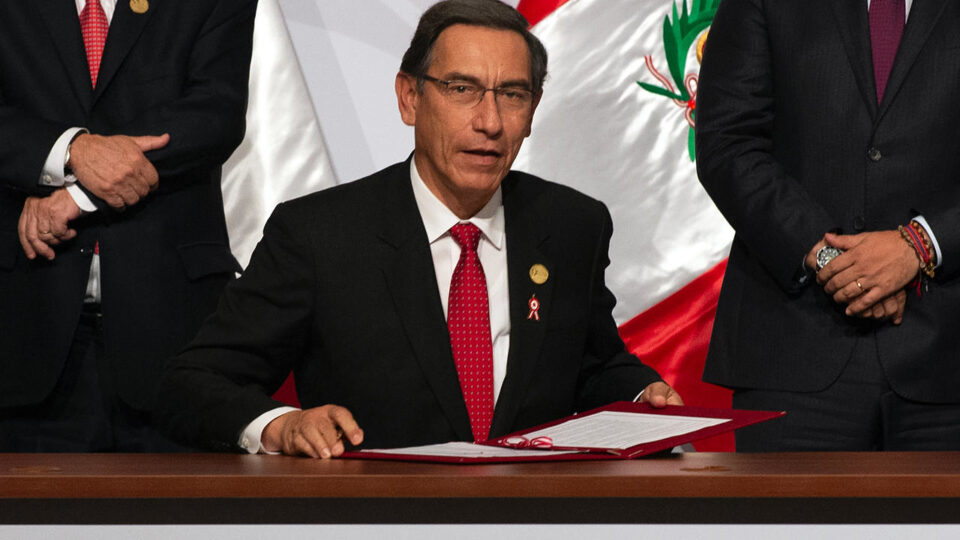 Peruvian President Martin Vizcarra pushed back against his opponents on Monday days ahead of an impeachment vote, accusing Congress chief Manuel Merino of “conspiracy” by trying to secure military assurances for a bid to succeed him.

The government at the same time filed a lawsuit with the country’s top court to block the vote due on Friday.

Vizcarra went on television to insist he was victim of a conspiracy after an anti-corruption crusade that has put him and his minority government at loggerheads with Congress.

“Why has the president of Congress communicated with top military officials, and even planned pseudo-cabinets who would take over?” Vizcarra asked.

“That is conspiracy, gentlemen.”

Merino, in line to take over should the president be impeached Friday, admitted that he had contacted the generals, but only “to assure them Congress would act in a responsible manner and within a Constitutional framework.”

Congress voted late Friday to open impeachment proceedings against Vizcarra for “moral incapacity” over accusations he incited aides to lie to anti-graft investigators.

Vizcarra’s opponents need 87 votes in the 130-member legislature to oust him.

Vizcarra, in power since 2018, came under fire after leaked audio recordings in which he is heard telling aides to hide details from congressional investigators of his office’s controversial hiring of a popular singer as a paid cultural advisor.

In his televised address Monday, the 57-year-old president apologized for the crisis — which comes as the South American country suffers the world’s highest number of deaths per capita from the coronavirus — but insisted he had done nothing wrong.

The political crisis further rattled an economy which has already seen second-quarter GDP slashed by 30 percent due to the effects of the coronavirus pandemic.

“I offer my sincerest apologies. There is no crime or anything illicit in what has been spread.”

He said he had ordered “an exhaustive review of the control and security systems of the Presidential Office,” where the audio was surreptitiously recorded in May.

The leaks were “a betrayal by someone in my immediate environment,” he said.

“It makes me sad and, in addition to the disappointment, I regret to say that this is a situation of a personal nature that has transcended the political scene and been taken advantage of by obscure characters.”

Vizcarra has clashed repeatedly with the congress over attempts to pass anti-corruption measures, as well as judicial and political safeguards, including a recent reform banning convicted criminals from standing for election.

The Justice Minister earlier announced it was filing a suit with the Constitutional Court to block the impeachment vote.

“We have proceeded to present a lawsuit by the executive against the Congress,” on the grounds the legislature had exceeded its power in seeking to remove Vizcarra, Justice Ministry lawyer Luis Alberto Huerta told reporters in Lima.

Eloy Espinosa Saldana, one of seven judges on the Constitutional Court, told Peru’s America TV the court has “the power to block the impeachment process if we consider that there are elements or indications of a violation of jurisdictions” of the Congress.

Fourteen people are currently under investigation in the probe that has ensnared the president.

Prosecutors searched a number of homes at the weekend, including two members of Vizcarra’s staff with whom he speaks on the leaked tapes.

The presidents of Bolivia, Colombia and Ecuador — part of a regional political grouping with Peru called the Andean Community — have backed Vizcarra, calling on lawmakers to avoid impeaching him in the midst of an economic crisis caused by the coronavirus pandemic.