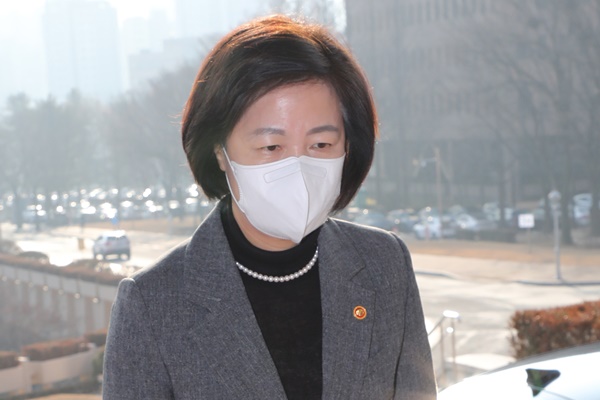 Amid calls from the main opposition People Power Party to pardon former President Park Geun-hye, who is in prison for corruption, former Justice Minister Choo Mi-ae described the events leading up to Park’s impeachment in December 2016.

On social media on Thursday, Choo recalled the time when she headed the then-main opposition Democratic Party(DP), claiming that the then-ruling Saenuri Party suggested a national unity government to evade Park’s responsibility for an influence-peddling scandal.

After rejecting the proposal, Choo said she urged the opposition to agree to a parliamentary investigation, as well as the opposition-suggested special counsel probe into the corruption allegations.

The former minister said she persuaded Rep. Kim Moo-sung, who was the leader of a non-Park faction of the ruling party at the time, to file the impeachment motion, citing public sentiment and a chance to restore democratic constitutional order.

Choo referred to Kim’s recent revelation that Park and her supporters had considered imposing martial law should the Constitutional Court dismiss the impeachment, emphasizing that the impeachment should never be refuted and dissuaded hasty calls for the ex-president’s pardon.

The former minister, instead, called for an investigation into the circumstances surrounding the alleged martial law review.