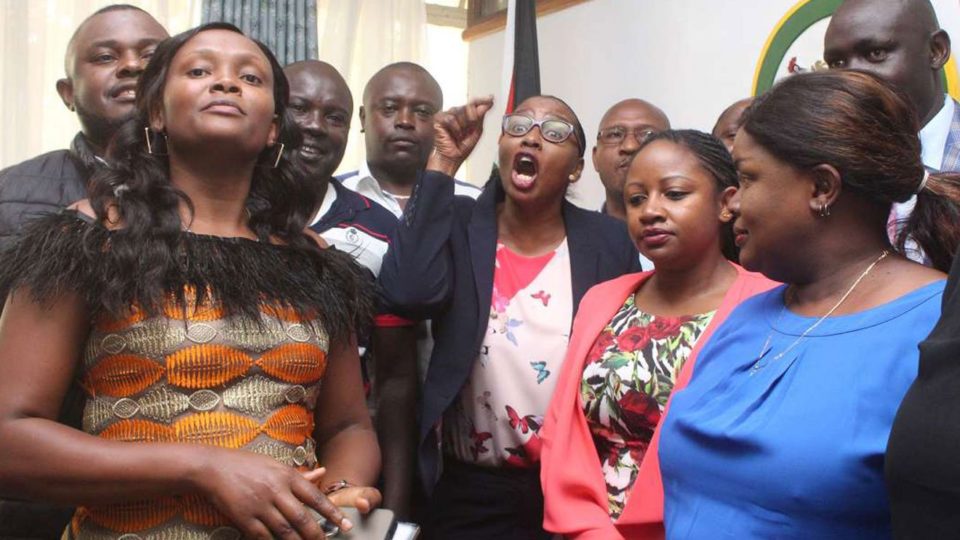 Nairobi Speaker Beatrice Elachi (centre) in a charged mood while surrounded by her supporters moments after she dissolved the assembly at City Hall on October 10, 2019. PHOTO | KANYIRI WAHITO

Nairobi County Assembly Speaker Beatrice Elachi has blamed Governor Mike Sonko of being behind the fresh bid by MCAs to remove her from office.

This even as MCAs allied to the Speaker vowed to restart a new push to remove Governor Sonko from office.

Elachi claims her woes are linked to her battle with clerk Jacob Ngwele and her stand on Nairobi Metropolitan Services (NMS) which the governor is embroiled in a war with the Director General Mohammed Badi.

She pointed out that the MCAs who now want to impeach her are those who are allied to Sonko and are unhappy with NMS for sealing all leakages at the county.

Ms Elachi further accused Governor Sonko and Mr Ngwele of teaming up to frustrate her after she stood her ground that Ngwele is not the assembly’s substantive clerk and also calling out the governor in his attempts to frustrate operations of NMS.

The former nominated senator alleged that the governor has a hidden hand in Ngwele’s return so that he can forestall his pending impeachment that had been initiated by MCAs but halted by the court.

“Sonko knows that there is a new clerk who was recently sworn in and he knows that his impeachment can come out of the court now and that is the war he has with me,” Elachi said.

“He has been using Ngwele in all his cases in court and right now he is very angry because he knows the order that stopped his ouster can be revived now that Ngwele is gone. The impeachment motion is motivated by that,” she added.

On Sunday, MCAs drawn from both sides of the political divide announced their renewed push to impeach Elachi saying that they have already collected 51 signatures in support of the ouster motion.

The ward representatives accused Elachi of abuse of office, illegal appointment of new assembly clerk, corruption, poor leadership, victimisation of MCAs and assembly staff; disregard of the law and county orders, and militarisation of the Assembly.

Nevertheless, MCAs allied to the Speaker, led by Minority Whip Peter Imwatok, have insisted that it is Governor Sonko who will be the first to be ousted.

Embakasi MCA Michael Ogada said they will restart the process of removing Sonko from office after the previous bid was stopped by the State.

“We want to remind Sonko that he is not going to impeach Elachi. We sponsored his motion to be removed but we are going to get back to that and remove him because he is a failure. We are going to start the process tomorrow (Tuesday),” said Mr Ogada.

The ODM MCA asked the State not to interfere this time around and allow the ward representatives to do our work.

Kayole Central MCA Jeremiah Karani said Ms Elachi is going nowhere as they are the ones who elected her as the Speaker.

When reached for comment, Sonko’s spokesperson Ben Mulwa asked Elachi not to hang on the governor over her woes with MCAs.

“She must be out of her mind to drag the governor into her impeachment. The MCAs have themselves been complaining about how she has been running the assembly,” he said.

Mr Mulwa also dismissed the new push to impeach the Governor saying, “those are sideshows by individuals looking for relevance and who want to divert the public from the real issues.”

Meanwhile, Elachi has defended the recent appointment and gazettement of a new clerk reiterating that Mr Ngwele has been in office illegally ever since he resigned from parliament, adding that Ngwele’s matter is now a foregone case as Edward Gichana is now the assembly’s substantive clerk.

“Where is Ngwele’s gazettement and where is his oath of office if at all he was procedurally appointed as the clerk of the County assembly? The court gave the assembly 45 days to recruit a new clerk following due procedure and that is what we have done,” she said.

Dems torch Pompeo in report ahead of hearing

USC Student Who Launched Impeachment Campaign Against Student VP Says It Wasn’t Prompted by VP’s Zionist Views, Apologizes to Her and Jewish Community