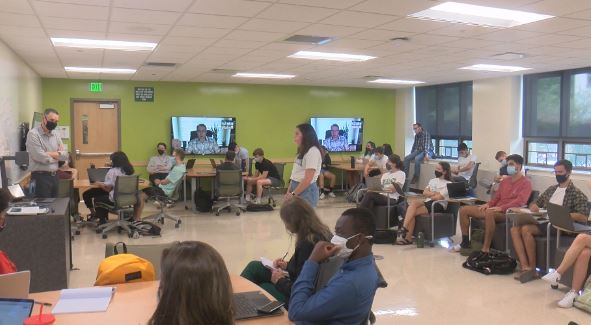 VESTAL (WBNG) — A controversial Binghamton University alum thrust into the national spotlight spoke out locally Tuesday about his decisions regarding his involvement in President Donald Trump’s impeachment trial.

Colonel Alexander Vindman spoke before a BU civic engagement class about his years in public service.

As part of the National Security Council, Vindman was part of a phone call between then President Trump and the president of Ukraine. Vindman says during that call, President Trump pressured his counterpart to investigate the Bidens, a move the colonel believed would compromise U.S. elections.

“After that phone call, I walked into my twin brother’s office before I formally reported the phone call, and I told my twin brother without any expectations that anything was going to become public, just to capture the gravity of the moment, I did a little dramatic pause and I said ‘Eugene, if what I’m about to tell you ever becomes public, the president would be impeached,” Vindman told the class Tuesday.

His decision to report the call and testify before Congress came under fire from President Trump, who tweeted in 2020 Vindman ‘was insubordinate’.

One student in the class, freshman Maya Soudatt, told 12 News Vindman’s decisions to come forward and to testify shed light on the inner workings of our country and its politics.

“Something that’s super serious and something that definitely unraveled a lot of truth’s about America’s government and the people in general,” she said.

Soudatt said while she would have handled the situation differently, she ultimately believes Vindman’s actions were patriotic, and would have made a similar decision.