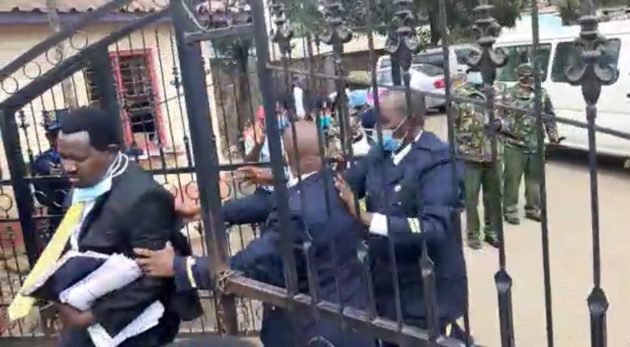 KITUI, Kenya June 29 – Drama unfolded in Kitui County Assembly Monday, when lawyers representing Governor Charity Ngilu were ejected on orders of Members of County Assembly (MCAs).
The lawyers are understood to have been responding to summons issued to the Governor when the MCAs ordered security to eject them.
They were subsequently blocked from accessing the office of the County Assembly clerk.

It was not clear if they sustained injuries during the scuffle.
The security officers were seen manhandling them and pushing them out before the main gate was shut.

They include lawyers Martin Oloo and Morris Kimuli, both representing the Governor.
Last week, Ngilu obtained orders stopping the County Assembly from tabling or debating an ouster motion against Ngilu.

Among the charges, she is facing are claims of irregular procurement procedures and failure to submit statutory deductions to the Kenya Revenue Authority, KRA.

On Monday, the county assembly announced that it had complied with the court suspending their plans to table Ngilu’s ouster motion.

The motion to remove Ngilu from office was tabled last week by Athi Ward Representative and the Assembly’s leader of majority Peter Kilonzo.

Some of the grounds advanced for the Governor’s ouster include gross violation of the Constitution and the County Governments Act by failing to honour summons of the Senate.

Council of Governors Chairman Wycliffe Oparanya has urged county assemblies countrywide to shelve impeachment plans on any governor and instead focus their energy on the war against COVID-19.

Trump Is Making the 2020 Election All About Himself

Isiolo MCA’s refute reports that an impeachment motion against Governor Mohamed Kuti is on the cards : KTN News

House Democrats move toward impeachment as Biden says ‘Trump should not be...

Trump’s impeachment vote: When it could happen, what it means, what next