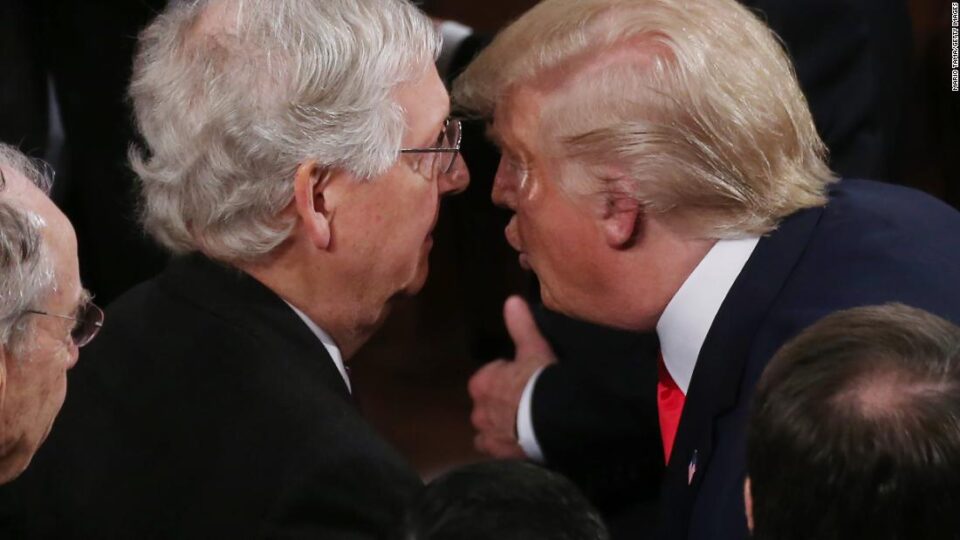 “If we didn’t have RINOs, the Republican Party would totally dominate politics,” Trump said in a statement via his Save America PAC earlier this month. “The good news is there are far less than there were four years ago—it is a dying breed—but nevertheless, and unfortunately, they still exist!”

“Mr. Trump has spoken recently with senators and allies about trying to depose Mr. McConnell and whether any Republicans are interested in mounting a challenge, according to people familiar with the conversations. There is little appetite among Senate Republicans for such a plan, lawmakers and aides said, but the discussions risk driving a wedge deeper between the most influential figure in the Republican Party and its highest-ranking member in elected office.”

Trump has been vocal, for months, in opposition to McConnell.

“I have quietly said for years that Mitch McConnell is the most overrated man in politics—now I don’t have to be quiet anymore,” Trump said in a statement in early August.

A month earlier, Trump said this: “Under the weak leadership of Mitch McConnell, Senate Republicans continue to lose. He lost Arizona, he lost Georgia, he ignored Election Fraud and he doesn’t fight.”

Trump has also moved to oppose McConnell in Alaska where the former president endorsed a Republican challenger to Sen. Lisa Murkowski. Trump also pushed former NFL star Herschel Walker into the Georgia Senate race despite private concerns about the running back’s candidacy voiced by those close to the Senate leader.

And while Trump has been the biggest pain in McConnell’s, um, butt, he’s also made clear he plans to go to war against other Republicans who dared to cross him.

Late last week, following the retirement announcement of Ohio Rep. Anthony Gonzalez, one of 10 House Republicans who voted to impeach Trump over his conduct during the January 6 riot at the U.S. Capitol, Trump issued a celebratory statement.

“RINO Congressman Anthony Gonzalez, who has poorly represented his district in the Great State of Ohio, has decided to quit after enduring a tremendous loss of popularity, of which he had little, since his ill-informed and otherwise very stupid impeachment vote against the sitting President of the United States, me,” Trump said. (That sentence is 50 words long. I counted.)

Earlier this month, Trump endorsed a Republican primary challenge to Wyoming Rep. Liz Cheney, who, like Gonzalez, voted to impeach the then-president over his role on January 6. “I strongly endorse Republican House of Representatives Candidate Harriet Hageman from Wyoming who is running against warmonger and disloyal Republican, Liz Cheney,” said Trump.

Ditto his endorsement of Joe Kent, who is running against Rep. Jaime Hererer Butler, who voted to impeach Trump as well. “Joe Kent is a retired Green Beret and Gold Star husband running against RINO and incompetent Congresswoman Jaime Herrera Beutler in the 3rd District of the State of Washington,” said Trump.

Time and time again in recent months, Trump saves his most stinging vitriol for members of his own party. Which is consistent with the campaign he ran in 2016 in which he positioned himself as opposed as much to the presidency of George W. Bush as he did to that of Barack Obama.

That tension has continued in Trump’s post-presidency. In response to a speech by Bush on the 20th anniversary of the September 11, 2001 attacks in which he equated the mentalities of foreign and domestic terrorists, Trump laced into Bush: “He shouldn’t be lecturing us about anything. The World Trade Center came down during his watch.”

To the extent Trump has any sort of grand strategy — and I am somewhat skeptical he does — it appears to be pointed primarily at destroying the version of the Republican Party that was dominant before he entered politics in 2015. What’s more remarkable? The vast majority of establishment types seem totally fine with it.

How Mitch McConnell Really Felt About Donald Trump’s Election Loss, According To This Book

Many citizens should be impeached