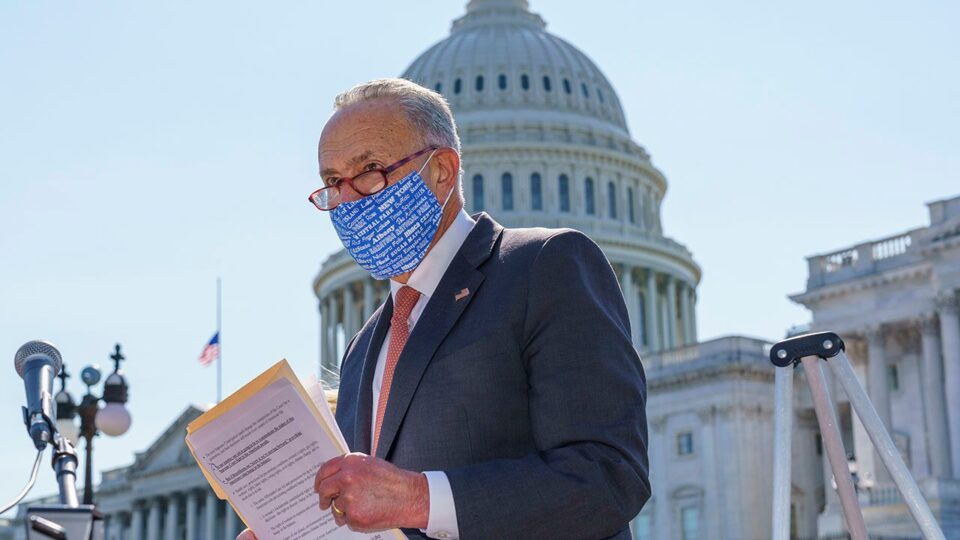 There was never much they could do to sidetrack the nomination of Amy Coney Barrett for the Supreme Court.

They could complain about the process, contending Republicans went back on their word.

They could blame their favorite foil.

“(Senate Majority Leader Mitch) McConnell is angry. Why? Because we Democrats have exposed that he has defiled the Senate as an institution, more than any other person in this generation,” thundered Senate Minority Leader Chuck Schumer, D-N.Y.

They could invoke the ghost of Merrick Garland.

They could talk about looming Supreme Court cases on Obamacare and Roe v. Wade.

But sometimes in politics, you just can’t tip the field in your direction. The odds simply aren’t in your favor.

Such was the case with Barrett.

Barrett’s confirmation hearing came and went. Nothing nefarious arose about her past.

That’s notable. Not because it’s Barrett. But just because that’s the way things just seem to go down on Capitol Hill.

We’ve had other charges arise just after a Supreme Court confirmation hearing concludes. Consider the allegations leveled by law professor Anita Hill at Justice Clarence Thomas in 1991. That came after Thomas’s hearings wrapped up.

But Barrett is hurtling toward confirmation.

And there’s nothing Democrats can do about it.

There probably never was.

Democrats were hamstrung – both by choice and circumstances.

Progressives railed at Democrats. They raged at Sen. Dianne Feinstein, D-Calif., the top Democrat on the Judiciary Committee, for appearing too deferential toward Barrett. And, way too conciliatory toward Judiciary Committee Chairman Lindsey Graham, R-S.C.

Graham’s locked in a tight battle to hold his seat against Democratic challenger Jaime Harrison. Many Democrats hold particular enmity for Graham – lashing out at the left during the Kavanaugh hearing two years ago. That’s to say nothing of Graham’s transmogrification from a “Never Trumper” back in 2015 to the president’s golf buddy.

That’s why some on the left would have preferred a political brawl over Barrett.

Nothing crystallized that left-wing groups viewed as wrong with the Barrett confirmation process. Feinstein hugged Graham – perhaps drawing the ire not only from NARAL on political grounds, but from health experts on pandemic grounds.

AMY CONEY BARRETT CONFIRMATION: WHAT TO EXPECT IN THE SENATE OVER THE NEXT FOUR DAYS

“This is one of the best sets of hearings that I’ve participated in,” Feinstein complimented Graham.

Now some liberal groups want to strip Feinstein of her seniority on the committee. If Democrats win the Senate this fall, Feinstein is poised to become the first female chair of the Judiciary panel. But some on the left would prefer replacing her with Sen. Sheldon Whitehouse, D-R.I., Sen. Amy Klobuchar, D-Minn., or even Sen. Patrick Leahy, D-Vt. Leahy used to lead the Judiciary and has the most seniority of any senator.

It’s not unheard of for the Senate to sideline senior lawmakers from a chairmanship. But that’s usually due to health concerns.

Unseating Feinstein would be messy.

Schumer was terse when asked about Feinstein’s future.

Senate Judiciary Committee ranking member Sen. Dianne Feinstein, D-Calif., speaks during a news conference after boycotting the vote by the Republican-led panel to advance the nomination of Judge Amy Coney Barrett to sit on the Supreme Court, Thursday, Oct. 22, 2020, at the Capitol in Washington, as other Democratic committee members look on. (AP Photo/J. Scott Applewhite)

“I’ve had a long and serious talk with Sen. Feinstein,” Schumer said about concerns of her stewardship on the Judiciary panel. “That’s all I’m going to say about it right now.”

Democrats frankly don’t want to rock the boat at this stage. They’re content with their standing in the polls just before the election. Despite a push from the left, Senate Democrats feared Barrett’s hearings could devolve into a melee. They didn’t want anything mirroring the 2018 cage match to confirm Kavanaugh.

So Democrats pulled the political and parliamentary levers they had.

They boycotted a committee vote to send Barrett’s nomination to the floor. In place of senators, Democrats left gigantic cardboard cutouts of constituents with health care stories in their seats in the committee room. The Democratic side of the dais resembled the third base mezzanine at Citi Field, adorned with picture cutouts of Mets fans.

“The boycott today, frankly, is a stunt to appease the left-wing, activist base that’s angry,” said Sen. Ted Cruz, R-Texas. “They’re angry that the Democrats are not able to stop this nomination.”

But Cruz was wrong. The Democrats’ stunts did nothing to mollify the left.

Democrats met opposition from their own side when they attempted to conduct a socially distanced press conference on the Senate steps, explaining their committee absences. Boisterous demonstrators – some decked out in scarlet togs from “The Handmaid’s Tale” – hectored Democrats as they tried to speak.

“Should we just go forward?” asked Schumer over the din.

“I wonder if it’s going to stop,” said Feinstein.

Sen. Richard Blumenthal, D-Conn., tried to reason with the activists but got nowhere.

“You showed up and legitimized the process,” shouted one protester.

This division is emblematic of problems which could await Democrats should Joe Biden win the White House and Democrats capture the Senate. There’s a growing schism between liberal and moderate Democrats. Democratic wins next month could exacerbate the division as Rep. Alexandria Ocasio-Cortez, D-N.Y., and others try to lug the party to the left on economic and environmental issues.

This fracture is similar to internecine fights Republicans have wrestled with since the tea party emerged in 2009. These days, mainstream GOPers have to deal with President Trump and QAnon.

But there’s some Republican dissent on Barrett as well.

Sens. Lisa Murkowski, R-Alaska, and Susan Collins, R-Maine, immediately expressed concerns about the Senate moving at breakneck speed to confirm any nominee so close to an election. Murkowski Saturday acknowledged she lost the fight to delay the confirmation and would vote “yes” on Monday to confirm Barrett on her merits.

“I oppose the process that led us to this point, but I do not hold it against her,” Murkowski said.

Collins supported Kavanaugh two years ago – and took heat for her decision. Collins is locked in a pitched battle for re-election this fall.

Murkowski opposed Kavanaugh but ultimately voted “present” on the nomination in 2018. That was an effort to offset an absence by Sen. Steve Daines, R-Mont. Daines supported Kavanaugh. But the vote fell on the same day his daughter was getting married in Montana.

There are 53 Republicans in the Senate. If Collins is a nay, that means Barrett’s nomination likely has a maximum of 52 yeas – one vote past the bare minimum necessary for confirmation

On Friday afternoon, Schumer tried to toss one last monkey wrench into the parliamentary gearboxes. For the first time since 2010, the New York Democrat shifted the Senate into a brief, “secret session.” Schumer said senators should have a “candid” discussion about what Republicans were trying to do to confirm Barrett.

The doors to the Senate chamber were closed and locked. Cameras were turned off. Reporters and most aides were shooed out of the gallery and off the floor.

The Senate usually only meets in a secret session to consider grave national security matters or even articles of impeachment – although there was no closed session in the impeachment trial of President Trump. The Senate mostly met in secret during the 1790s. Schumer’s maneuver was reminiscent of a 2005 tactic by then-Senate Minority Leader Harry Reid, D-Nev., slipping the body into a closed session to discuss faulty intelligence which sparked the war in Iraq.

But even Schumer’s move for a secret session lacked impact. During the closed session, McConnell, R-Ky., simply called a vote to immediately re-open the doors. Which the Senate promptly did.

Democrats were again stuck. Their left flank is crying for more. But there’s nothing they can do to derail the confirmation of Amy Coney Barrett.

Sharlee Mullins Glenn: Romney brings some welcome honor back to the Senate

Resist Trump worked, thanks to the efforts of many

The hypocrisy about reaction to Trump’s lawsuits | Opinion