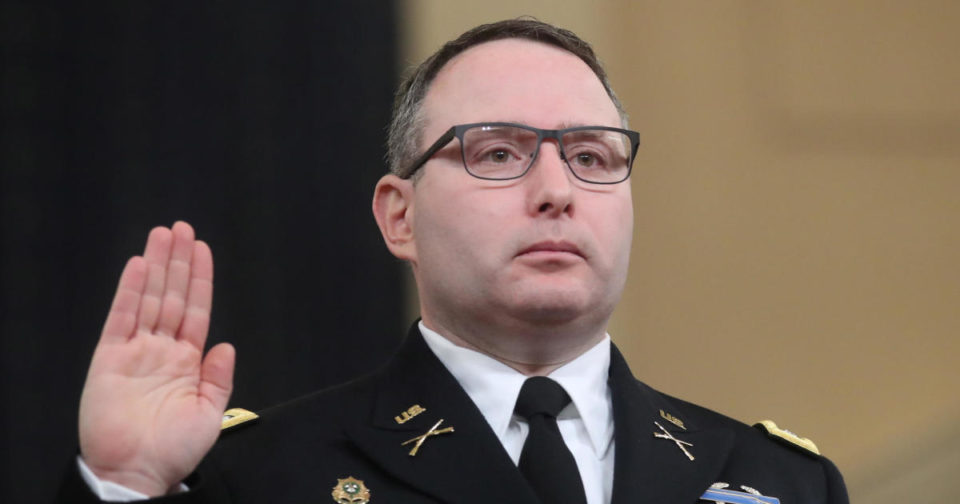 Washington — Democratic Senator Tammy Duckworth, a combat veteran from Illinois, announced Thursday she plans to block more than 1,100 military promotions until she receives confirmation from Defense Secretary Mark Esper that he will not block an expected promotion for the Army officer who was a key witness in President Trump’s impeachment proceedings.

Duckworth said she is seeking written confirmation from Esper that “he did not, or will not, block the expected and deserved promotion” of Lieutenant Colonel Alexander Vindman, who testified before House investigators during their impeachment inquiry into Mr. Trump’s dealings with Ukraine, to full colonel.

Duckworth’s blanket hold applies to 1,123 senior military promotions above the rank of colonel.

“Our military is supposed to be the ultimate meritocracy,” Duckworth, who served in the Reserved Forces for more than two decades, said in a statement. “It is simply unprecedented and wrong for any commander in chief to meddle in routine military matters at all, whether or not he has a personal vendetta against a soldier who did his patriotic duty and told the truth — a soldier who has been recommended for promotion by his superiors because of his performance.”

Duckworth said she will lift her hold on Senate approval of the promotions once Esper confirms whether Vindman was among those selected for promotion from lieutenant colonel to colonel, whether the Army included Vindman on its list of promotions to colonel sent to the Pentagon, and whether Esper or another Defense Department official will or has submitted a list of Army promotions to colonel to the White House for approval that includes Vindman.

During testimony before the House Intelligence Committee, Vindman said Mr. Trump’s suggestion to Zelensky was “inappropriate.”

The call was the focal point of House Democrats’ impeachment inquiry into Mr. Trump, who was impeached by the House on charges of abuse of power and obstruction of Congress in December. The president was acquitted of both charges by the Senate in February.

Days after Mr. Trump’s acquittal, Vindman was removed from his post at the National Security Council and escorted out of the White House.

Mr. Trump has attacked Vindman, claiming he was “very insubordinate” and “was given a horrendous report by his superior,” and his criticisms of the Army officer furthered concerns that the president was retaliating against those who testified against him during impeachment proceedings.

The Washington Post reported last month that numerous government officials were concerned Vindman’s promotion was in jeopardy due to his participation in the impeachment inquiry. Promotions are typically approved by the Army and Pentagon before they are submitted to the White House and Senate for confirmation.

Impeachment will be topic at Sumter County Genealogical Society meeting