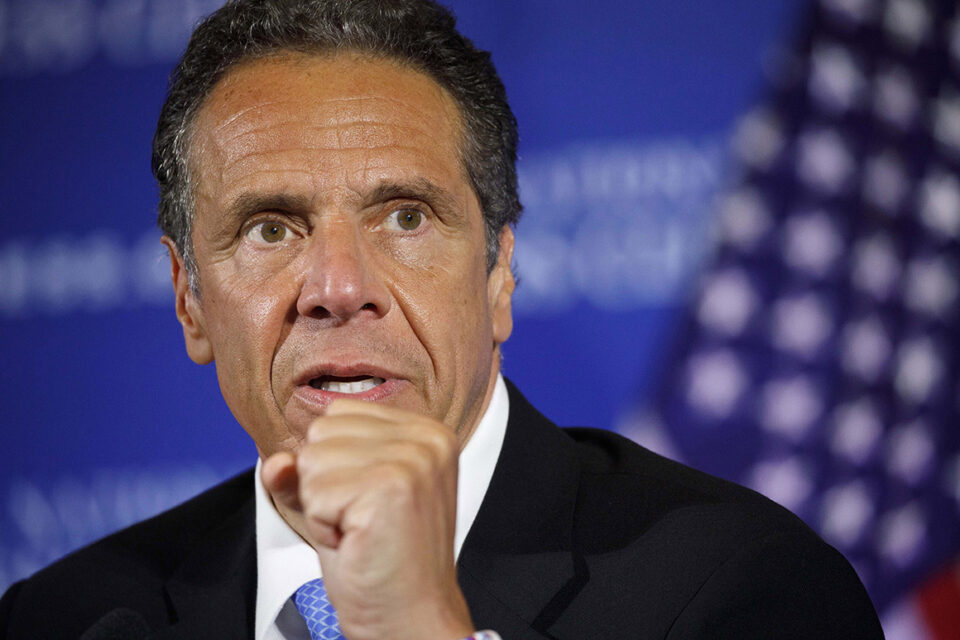 ALBANY — The New York State Assembly’s report on its eight-month impeachment investigation supports many of the allegations that have surfaced about former Gov. Andrew Cuomo and provides fresh insight into his use of state resources to clinch a $5 million book deal amid the height of the Covid-19 pandemic.

The report focuses on three of the major allegations made against the ex-governor in recent months, who resigned in August amid the Assembly’s probe and other investigations.

The report, released Monday after a week of previews by Albany lawmakers, bolsters the findings of Attorney General Tish James’ probe into allegations of sexual harassment, concluding that “the former Governor’s challenges to the allegations” cannot “overcome the overwhelming evidence of his misconduct.”

It concludes that the Cuomo administration manipulated data on deaths of nursing home residents during the pandemic, with the goal of combating criticisms over his decision-making.

And the report provides more details in its conclusion that Cuomo’s memoir “American Crisis: Leadership Lessons from the COVID-19 Pandemic,” relied on the use of state staff who did not volunteer their time.

The Assembly is not expected to turn its probe, which started in March, into the basis for a post-resignation impeachment of Cuomo. But it says it plans to share its findings with law enforcement officials.

Cuomo’s book: The subject on which the report contains the most new information is the ex-governor’s book deal. Various reports in recent months have said that state staff was used to help Cuomo author his fall 2020 memoir on the pandemic, for which he signed a contract worth over $5.1 million.

His representatives have repeatedly said that all of this work was either voluntary or de minimis. But the Assembly’s report argues it was neither.

“The evidence obtained demonstrates that senior officials, and the former Governor, worked on the Book during the course of normal work routines,” the report says. “One senior state official referred to work on the Book as no different from any other assignment he received from the Executive Chamber during COVID. The state official explained that Book-related assignments were given by superiors and were expected to be completed like any other task. He further explained that the work was not voluntary, as he was never asked to volunteer and was not aware of other officials being asked to volunteer.”

A separate senior official said in an Aug. 2020 text message “that work on the Book was compromising his ability to work on other COVID-related matters.”

One senior staffer “served as the key point of contact” with the publisher, Penguin Random House, “and sent and received at least 1,000 emails regarding the Book during the period from July to December 2020.”

That staffer — who was not explicitly named, but is clearly former top aide Melissa DeRosa, based on other descriptions in the report — also helped set up an all-day meeting with the publisher, the governor, and top staffers on a Friday in July and sent emails during the workweek “asking public figures to attend events with the then-Governor to promote the Book.”

“Melissa took time off from work whenever she was involved with the book and meticulously indicated so on her time sheets,” said Paul Shechtman, DeRosa’s lawyer.

The report also argues that lower-level staff were also closely involved in the book’s authorship on a non-volunteer basis.

“A junior staffer recalled that late one evening, likely in June or early July, a senior Executive Chamber official instructed junior employees to compile materials related to then-Governor Cuomo’s COVID press briefings on an urgent basis, a task that took approximately five junior employees several hours to complete,” the report says. “In hindsight, the junior staffer believes this work was related to the preparation of the Book. In interviews and attorney proffers, several other junior Executive Chamber employees described participating in activities that they understood to be related to the Book — including transcribing dictations, printing and personally delivering documents, and compiling documents,” the report states.

In a written statement responding to the report, Cuomo spokesperson Rich Azzopardi denied that staffers were forced to work on the book and accused the Assembly of hypocrisy.

“The people who volunteered to work on the book were people mentioned in the book and therefore they were involved to make sure the representations concerning them were accurate,” he said. “Staff who volunteered took time off, evidencing that they were volunteering and not on state time … The Assembly report is hypocritical, revisionist and damns themselves as the Assembly effectively forces employees to volunteer on their political partisan campaigns as standard practice and if they want to debate it we welcome it.”

There are at least a couple of other probes investigating the book deal. Last week, the state Joint Commission on Public Ethics revoked the authorization it gave Cuomo to make outside income from writing the memoir, due to the allegations that state staff helped author it. That revocation could eventually lead to an attempt to claw back his earnings.

Sexual harassment: The Assembly’s conclusions further affirm the accounts of nearly a dozen women who have come forward to accuse Cuomo of harassment and belie many of Cuomo’s arguments against the conclusions in James’ August report. Some — but not all — of the women in James’s report provided additional testimony to the Assembly.

It specifically highlighted testimony from former aide Brittany Commisso, who said Cuomo groped her at the executive mansion last year, leading to criminal charges. It also details testimony from a state trooper who said the former governor touched her inappropriately on multiple occasions and made several inappropriate and offensive comments.

Furthermore, Cuomo was well aware of the definition of sexual harassment — as he affirmed in his sworn testimony to the attorney general’s office.

The Assembly also noted that Commisso’s timeline of the events — which Cuomo and his personal attorney Rita Glavin had called into question as inconsistent across various interviews and records — did not invalidate her account and that Commisso “has been consistent in all material respects in describing the former Governor’s conduct toward her.”

Cuomo’s denials of some of the accusations and his arguments against some of the others — that his intentions were not malicious — do not negate the evidence that they occurred, according to the report. Neither does his staff and former aides calling into question the reputations and motivations of the women who made the accusations, the report adds.

“Such an approach obscures the totality of the former Governor’s conduct toward women, not only in the Executive Chamber but in the workplace more broadly, and even toward his constituents,” the report states.

“We have reviewed the former Governor’s challenges to the allegations, and nothing in his voluminous submissions can overcome the overwhelming evidence of his misconduct,” it says.

“Any report that uses the Attorney General’s politically biased investigation as a basis is going to be equally flawed,” Azzopardi said in his statement. “Once again, the fact that an employee entered and exited the Executive Mansion as part of her job was never in dispute and once again this report offers no evidence to support any allegation. What is interesting is that the Assembly didn’t even try to prove Tish James’ bogus ‘11 legal violations,’ and instead only focused on two. When all the facts are fairly weighed there will be none.”

The inclusion of the staffers’ experiences was not meant to diminish the other reports, but to exemplify the nature of Cuomo’s behavior, the report states, adding, “each [account] independently satisfies the definition of sexual harassment under New York State law.”

Nursing home deaths: The report also bolstered various other investigations’ findings that the Cuomo administration undercounted the number of deaths at nursing homes during the early months of the pandemic.

The administration only included the number of deaths of individuals who died in nursing homes, omitting those who caught Covid while residents, but who died in other facilities. The counting occurred at a time when Cuomo was facing criticism for his decision to direct nursing homes to accept Covid-positive patients.

“Evidence obtained during our investigation demonstrates that while the [Department of Health] Report was released under the auspices of DOH, it was substantially revised by the Executive Chamber and largely intended to combat criticisms regarding former Governor Cuomo’s directive that nursing homes should readmit residents that had been diagnosed with COVID-19,” the report concludes.

The Assembly report didn’t do a deep dive into the causes and effects of Cuomo’s nursing home policies, saying it was not within its mandate and would be outside of their particular qualifications. It also noted that some of the actions taken at the time were “made in the context of a once-in-a-century event that was fast-moving and presented significant challenges.”

What’s next: Assembly leadership has repeatedly made clear it has no plans to conduct a post-resignation impeachment of the ex-governor. The report pointed to an 1853 memo from the Judiciary Committee to argue that it doesn’t have the power to continue a formal proceeding.

That memo made clear “from the terms of the Constitution, that the person must be in office at the time of impeachment[,]’ as the Constitution ‘provides but two modes of punishment . . . removal from office, or removal and disqualification to hold office; in either mode of punishment the person must be in office, for removal is contemplated in both cases, which cannot be effected unless the person is in office,’” according to the report released Monday.

(That 1853 memo, notably, is not necessarily binding. Its conclusion on the question of whether a governor could be impeached for a violation that occurred before he took office was ignored by the Legislature when it removed then-Gov. William Sulzer in 1913.)

But Assembly members have repeatedly said that they plan to share their findings with officials who might take other actions against Cuomo.

“The Committee has provided relevant information from its investigation to law enforcement and will continue to cooperate with respect to any such investigation,” the report says on the question of sexual harassment.

The Assembly also said it does not plan to share all of the underlying evidence with the ex-governor’s lawyer, despite her requests.

“In the face of an impeachment trial, the former Governor chose to resign, not to contest the available evidence and confront witnesses in that legal forum. Having foregone that opportunity, he is not entitled to the production of any further evidence from this Committee,” the report states.

This article tagged under: