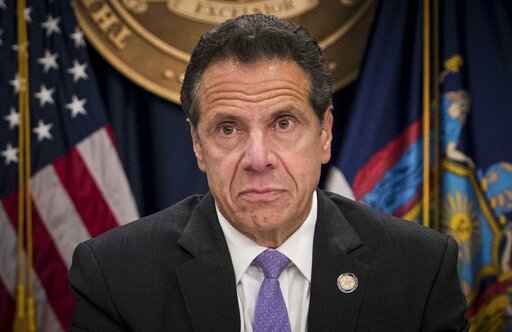 Cuomo’s accusers gave sworn depositions to investigators, meaning they were under oath and faced the possibility of perjury charges if they lied. Andrew G. Celli Jr., an attorney who was chief of the civil rights bureau in the attorney general’s office from 1999 to 2003, said he expects that Cuomo will be questioned under the same conditions.

“I’m sure it will be respectful but it will be rigorous. It will be detail oriented. It will not be a conversation or a chat or a discussion. It will be this question and answer format. It’s very much unlike a press conference,” said Celli, who is now at the firm Emery Celli Brinckerhoff Abady Ward & Maazel LLP.

Though the investigation is not criminal in nature, Celli said Cuomo can assert his Fifth Amendment right and refuse to answer questions he feels may incriminate him.

The timing of Cuomo’s interview with investigators was confirmed Thursday to The Associated Press by two people familiar with the investigation. They were not authorized to speak publicly about the case and did so on condition of anonymity.

Cuomo, in office since 2011, has rebuffed those calls and is moving forward with plans to run for a fourth term next year. Rivals, though, see a Cuomo weakened by scandal as politically vulnerable.

Cuomo raised $2.3 million from January through June – down from $4 million in the second half of 2020, according to campaign finance filings released late Thursday.

James, who is independently elected and does not report to the governor, hired former Acting U.S Attorney Joon Kim and employment discrimination attorney Anne Clark in March to lead the inquiry. Their findings will go in a public report.

Several women have accused Cuomo of unwanted kisses, touches and groping and inappropriate sexual remarks. Former aide Lindsey Boylan said Cuomo once suggested a game of strip poker aboard his state-owned jet. Another former aide, Charlotte Bennett, said Cuomo made sexual advances by making unwelcome comments, including asking if she ever had sex with older men.

Cuomo initially apologized and said he “learned an important lesson” about his behavior around women and would “fully cooperate” with the investigation. Since then, he’s denied that he did anything wrong and questioned the motivations of accusers and fellow Democrats who have called for his resignation.

Cuomo’s spokesperson, Rich Azzopardi, on Thursday claimed without evidence that “leaks” about Cuomo’s interview were “more evidence of the transparent political motivation of the attorney general’s review.”

Debra Katz, Bennett’s attorney, said the governor is deflecting from his own conduct by trying to attack the attorney general and the investigation.

“It suggests he’s trying to give himself an out if he doesn’t like what they come up with,” Katz said.

There is no deadline for completing the investigation. A 2010 probe Cuomo oversaw as attorney general into his predecessor, Gov. David Paterson, lasted about five months.

The state Assembly’s Judiciary Committee, which is conducting the impeachment inquiry, also has the power to subpoena documents and witness testimony. It could rely on work done by the attorney general’s team of investigators, or gather its own evidence.

The scope of its inquiry goes beyond Cuomo’s conduct with women. The governor is also under fire for his handling of the COVID-19 crisis in the state’s nursing homes.

The committee’s work could result in the drafting of articles of impeachment against Cuomo, though that outcome is far from certain.

Cuomo’s campaign has paid $285,000 in legal fees to a firm representing him as he faces the sexual misconduct allegations. Taxpayers are on the hook for nearly $760,000 in legal fees to a law firm representing the governor’s executive chamber as federal prosecutors probe how the Cuomo administration reported coronavirus deaths of nursing home residents, according to the campaign finance filings.

The Hill’s 12:30 Report – Presented by Facebook – Manchin on board with spending deal