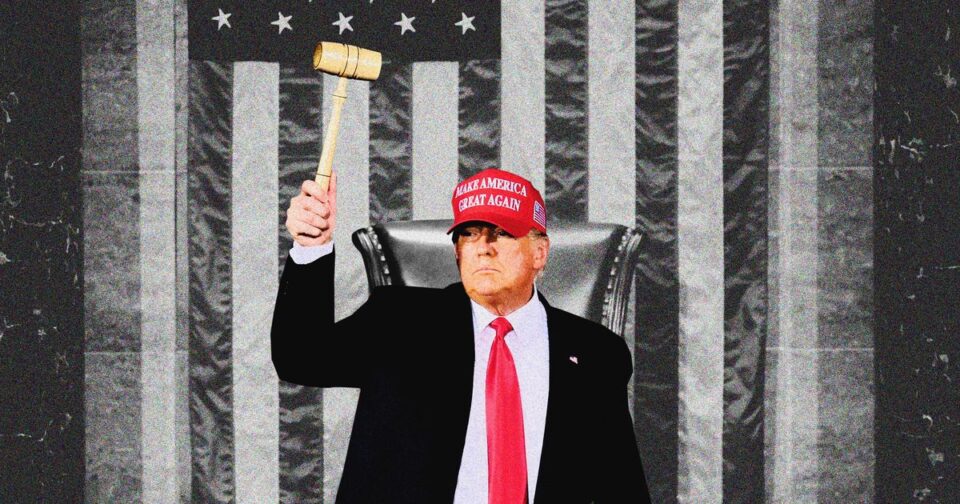 Those who still cannot accept the outcome of the 2020 election are spinning some surreal fantasies about how the restoration of Donald Trump need not await the next presidential contest. We are told that Trump himself is fixated on the extremely weird idea that after “audits” of 2020 votes in key states have been conducted, he will be reinstalled as president, perhaps even this summer. The absence of any constitutional sanction for such a coup presumably doesn’t bother the man who once said the document gave him the power to do whatever he wanted.

There’s another bizarre scenario floating around MAGA-land that is at least theoretically possible: If (1) Republicans retake the House in 2022, then (2) they could make Trump the new Speaker, and (3) Speaker Trump could orchestrate an impeachment and removal of Joe Biden and Kamala Harris in 2023, leading to (4) his return to the White House under the rules of presidential succession. Presumably, then, he would be reelected to a second full term in a 50-state landslide by a grateful nation liberated from the yoke of socialist election fraudsters.

Yes, this is laughable. But unlike the idea Trump will be returned to power in some sort of American version of the Glorious Revolution of 1688 that saved England from the ignominy of a Catholic monarch, it’s not impossible.

First of all, sure, Republicans can retake the House in 2022; at the moment, it’s the smart money wager given the size of the current Democratic majority, the history of midterm House losses by the president’s party, and Republican gains via reapportionment and redistricting. And here’s the surprising part: If they do control the House, constitutional scholars generally agree there’s no requirement that the Speaker be selected from the House membership (this possibility was thoroughly discussed back in 2015 when, for a while, Republicans couldn’t find a Speaker). And if it happened and someone challenged it in the courts, said courts would almost certainly defer to Congress to make its own rules.

The bigger questions are whether House Republicans would be willing to make Trump their Speaker, and whether he’d want the gig, which involves actual work in an institution about which he probably knows nothing.

Given the number of House Republicans who have either voted to impeach Trump (ten), and/or who would just as soon see him exiled to an island in the Arctic Sea, it would probably take a big GOP majority in 2023 to even contemplate dashing the dreams of Trump’s buddy Kevin McCarthy. And that seems very unlikely. As for Trump’s own willingness to become the oldest person to secure an initial election as Speaker at the age of 76, that, too, seems unlikely, though he might relish the spectacle of glowering behind Joe Biden during a State of the Union Address, not to mention control of the Judiciary Committee that moved to impeach him twice.

But in this extremely remote scenario, Trump would have to wait for 2024 for a chance to get the big job back. Even if he could convince the House to impeach Biden and Harris, and even if Republicans also regained the Senate in 2022 (a much dicier proposition than a House reconquest), Republicans are no more likely to secure the two-thirds vote needed for a Senate conviction than Democrats were in 2020 and 2021.

So the fantasy stops with Speaker Trump running for president in 2024, after two happy years of total obstruction and God knows how many incendiary speeches, resolutions, and bills. Since we don’t really know if Trump wants to be president again if it involves any real effort, it’s a far-fetched notion that can be put back in the dark parts of the mind where nightmares fester.

Daily news about the politics, business, and technology shaping our world.


By submitting your email, you agree to our Terms and Privacy Notice and to receive email correspondence from us.

Bob Good (VA-5) Votes Against Honoring Capitol Police with Congressional Medal of Honor. They Protected Him During Jan. 6 Insurrection.