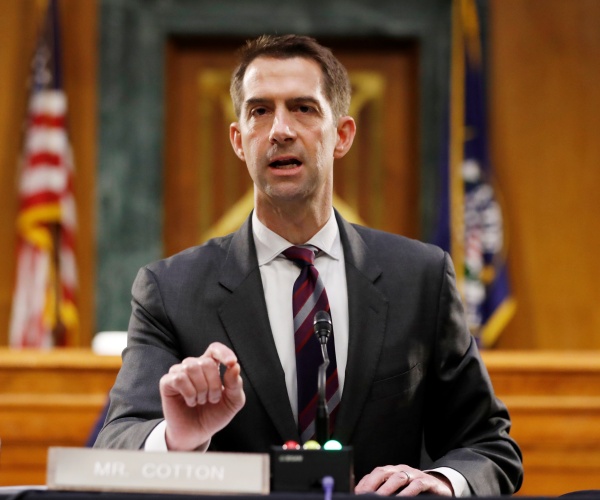 Sen. Tom Cotton said Monday he was trying to tell anyone who would listen back in January about the dangers of coronavirus, but it was “hard to get a word in edgewise in Washington” because of the impeachment proceedings against President Donald Trump.

“Look, no one was ringing the alarm about the coronavirus before me,” the Arkansas Republican said on Fox News’ “Fox and Friends.” “In the Nancy Pelosi and Adam Schiff-driven partisan impeachment in January, it was hard to get a word in edgewise in Washington. I was telling anyone who would listen that this virus was deadly and we needed to take immediate action.”

“What he did do, on my advice and the advice of his advisors was immediately shut down travel from China,” said Cotton. “What did Joe Biden do? He condemned that as racist and xenophobic.”

Cotton dismissed comments Bob Woodward made on “60 Minutes” Sunday that he believes Trump is the “wrong man for the job” as coming from the “media wing of the Democratic Party trying to attack the president 50 days before the election.”

“Very few people understood how dangerous the virus was or what action should be taken,” said Cotton. “President Trump did the right thing. He protected Americans by shutting down travel. Joe Biden and the Democrats attacked him for that even as people like Nancy Pelosi and Bill de Blasio continued to encourage people in February and March to go into large gatherings in their cities.”

He also said he agrees with former FDA Commissioner Scott Gottlieb, who said Sunday there were mixed messages early about the disease.

“Dr. (Anthony) Fauci has even said that he didn’t hear any discrepancy between what the president said publicly and what the president said privately at the start of the pandemic,” said Cotton. “Dr. Fauci and many of our other public health professionals were recommending against mask usage as late as late February and early March. They later reversed that, but the president was acting on the best advice of his advisors. I can tell you because I was part of those about banning travel from China.”