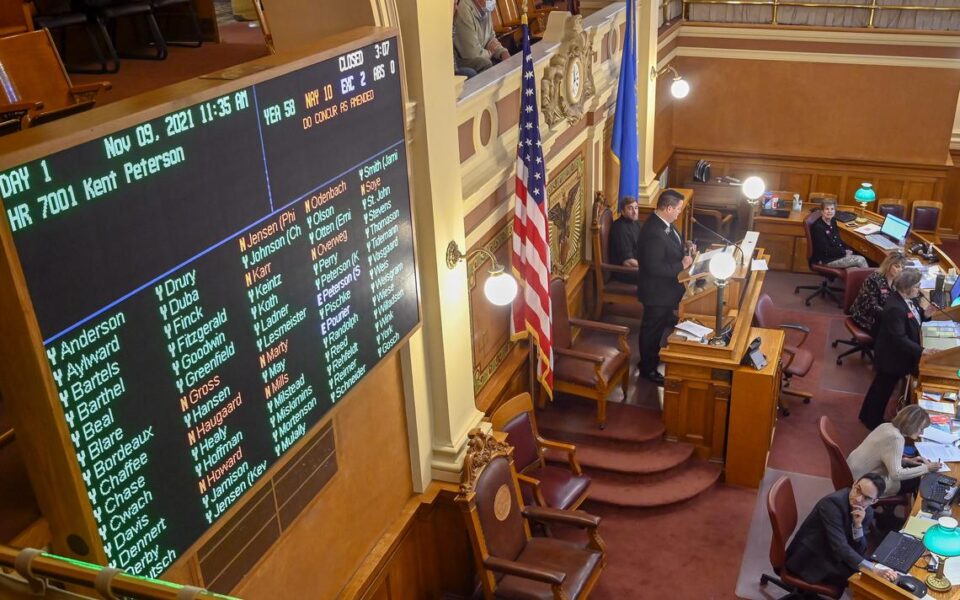 The first impeachment select committee in South Dakota’s history opened with an anti-climactic whimper earlier this month when a handful of lawmakers heard from a staff attorney that their task, while historic, also had droves of caveats and redundancies.

The purpose of the Nov. 10 meeting was to “come to the understanding of what our task is at hand,” declared House Speaker Spencer Gosch, R-Glenham.

Justin Goetz, chief research and legal analyst with the Legislative Research Council, effectively recited the text of House Resolution 7001 by telling the committee their scope was “over the conduct of Attorney General Ravnsborg surrounding the death of Joe Boever.”

When Gosch asked Goetz about whether the phrase “in office,” which follows “misdemeanors” on the litany of possible impeachable offenses in the Rushmore State’s constitution, Goetz deflected, noting that was a better question for the special counsel the committee agreed to hire.

And at one point, perhaps flummoxed by the open-ended timeline, Rep. Kevin Jensen, R-Canton, asked how long a response time should hypothetical subpoenas contain.

“This is way beyond the scope of anything we’ve done,” said Jensen, who added he was just “trying to figure out how to get things done in a timely manner.”

South Dakotans, according to a recent survey, are widely behind impeaching Ravnsborg for striking and killing Boever, who walked along a dark highway after his truck ran into the ditch just west of Highmore, South Dakota, on Sept. 12, 2020.

After Ravnsborg’s vehicle hit Boever, he told the county dispatch that he may have hit a deer. He missed Boever’s body that evening during a quick, subsequent search of a dark ditch. Then, Ravnsborg borrowed the county sheriff’s personal vehicle and drove back to Pierre.

But if and when South Dakota’s Legislature impeaches the Republican, it may only be a few months away from a subsequent summer GOP convention, where former Attorney General Marty Jackley would be the odds-on favorite to again be the party’s nominee going into the 2022 election.

Moreover, the Legislature’s select committee hasn’t been keeping the most brisk of calendars. After meeting more than two weeks ago, they’ve yet to meet since. On Tuesday, Nov. 23, Gosch told Forum News Service that “likely next week” would be when the team next meets.

“News to me,” said Nick Nemec via email on Tuesday. Nemec, who is Joe Boever’s cousin, stood in the hallway shaking hands of conciliatory lawmakers in the Legislature session prior to an impeachment vote on Nov. 9, but said “they certainly aren’t keeping me in the loop.”

On Wednesday, Nov. 24, the committee’s vice-chair, Rep. Mike Stevens, R-Yankton, also said he’d yet to hear a meeting for next week confirmed. Asked if they’d hired the special counsel yet, Stevens said, “You’d have to talk to the speaker about that.”

When the committee continues, some powers are laid out. They can subpoena witnesses, they can review documents and, thanks to a transparency amendment from Rep. Will Mortenson, R-Pierre, investigatory documents will also be shared with the full House and possibly members of the public.

But another transparency fight is brewing. Gosch has so far refused to make public a list of the legislators who voted for calling a special session in the first place, amid growing threats of another round of legal action from the South Dakota Newspaper Association and the Sioux Falls Argus Leader. On Tuesday, an attorney for one of the media plaintiffs confirmed that he’d likely bring the lawsuit in early December.

With the full legislative session less than two months away, it’s entirely possible the select committee’s work gets shoved to the side until January. Pierre is notoriously quiet during the session’s first week. Once business gets going, slipping in contentious, historic hearings on impeachment could be a hard sell to lawmakers.

One thing is for certain. Whether or not the committee finds Ravnsborg committed impeachable offenses, at some point, the select committee’s members will need to let the rest of the Legislature know their conclusions.

“Regardless of what you find, the committee must issue a report to the House,” Goetz said.

Whether that comes with snow or spring flowers on the banks of the Missouri River is anyone’s guess.