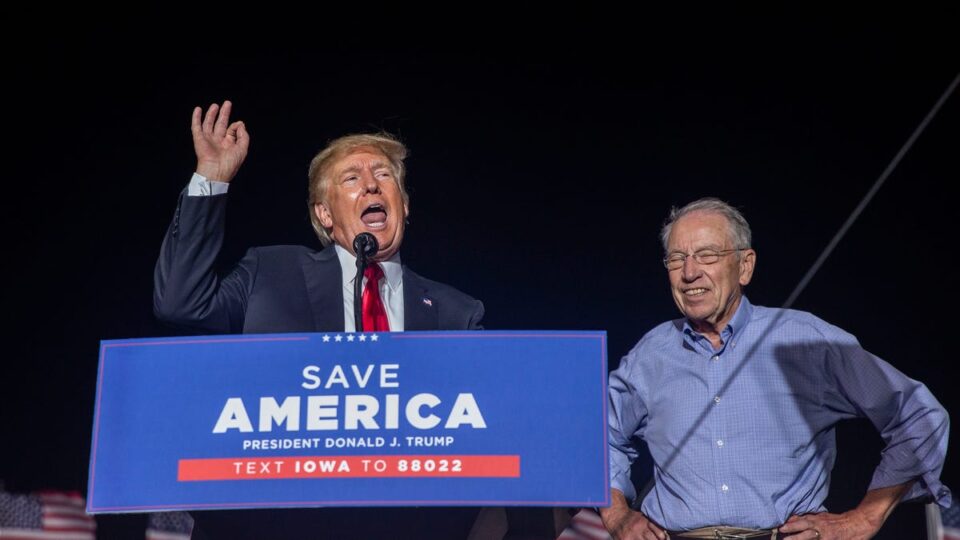 “He’s a private citizen,” Grassley told reporters following an event in Des Moines. “He can say anything he wants to. I’m looking to the 2022 election and presenting my case to the people.”

Grassley was among the opening speakers at Trump’s rally at the Iowa State Fairgrounds last week, and he appeared alongside him to accept the former president’s formal endorsement in his 2022 reelection campaign.

The appearance — an apparent embrace of Trump — surprised some political observers, who pointed to Grassley’s rebuke of the former president following the Jan. 6 U.S. Capitol riots.

“President Trump continued to argue that the election had been stolen even though the courts didn’t back up his claims,” Grassley said in a Feb. 13 statement, following the Senate’s acquittal of Trump.

“He belittled and harassed elected officials across the country to get his way. He encouraged his own, loyal vice president, Mike Pence, to take extraordinary and unconstitutional actions during the Electoral College count,” Grassley said. “There’s no doubt in my mind that President Trump’s language was extreme, aggressive, and irresponsible.”

Previously: Will Chuck Grassley keep running? A decision looms as he eyes an 8th term in the US Senate

The rally was Trump’s first visit to Iowa since he lost the election and was impeached a second time. He continued to lie about the outcome of the election, claiming without evidence that it was rigged against him. At one point, the crowd began to chant “Trump won! Trump won!”

Grassley said he wanted to take advantage of the large crowd of Iowans and share his views on policy.

“I took advantage of what I do with most presidents, whether Republican or Democrat. I don’t look at the individual president — do I like him or not like him. I look at their policies. So I had five minutes to point out the bad policies of this president.”

But Grassley would not say outright whether he agrees with Trump’s continued false claims of fraud.

“I spoke to that on December the 13th when the electoral votes were cast, and I said ‘President Biden’s president of the United States,'” he said.

Grassley, 88, announced in September he would run for an eighth term in the U.S. Senate.

A recent Des Moines Register/Mediacom Iowa Poll shows him with a clear lead over Democrat Abby Finkenauer. But that same poll showed Trump is viewed favorably by a greater share of Iowa Republicans.

According to the poll, 81% of Iowa Republicans view Grassley favorably, while 91% view Trump favorably.

Grassley acknowledged as much when he accepted Trump’s endorsement at the rally.

“I was born at night, but not last night,” he said from the stage. “So if I didn’t accept the endorsement of a person that’s got 91% of the Republican voters in Iowa, I wouldn’t be too smart. I’m smart enough to accept that endorsement.”

Brianne Pfannenstiel is the chief politics reporter for the Register. Reach her at bpfann@dmreg.com or 515-284-8244. Follow her on Twitter at @brianneDMR.