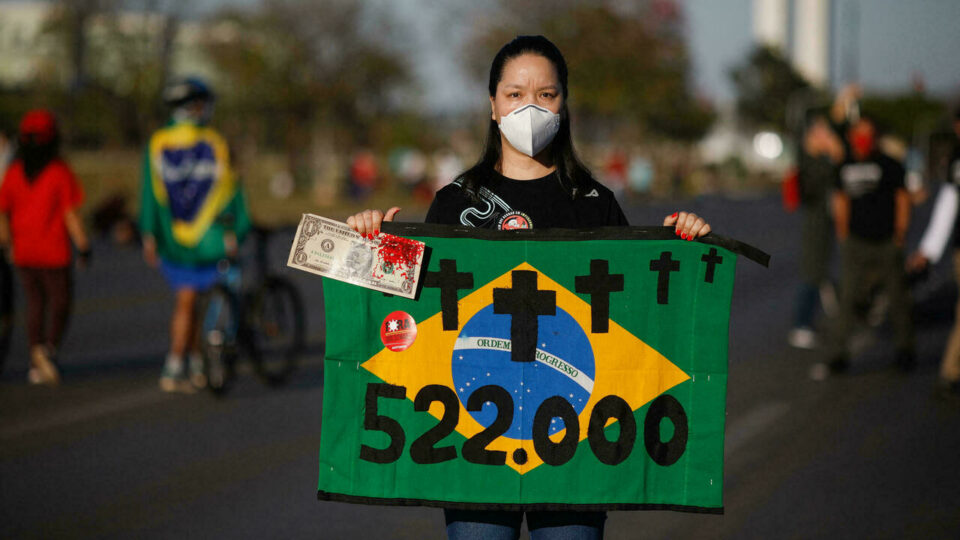 While France saw 161,000 people across the country protest against the government’s vaccination campaign this weekend, Brazil witnessed its fourth weekend of rallies against President Jair Bolsonaro’s handling of the Covid-19 crisis and anti-vaccine rhetoric.

Tens of thousands came together in cities and towns across the country on Saturday, galvanised by the slow vaccine rollout and their president’s spurning of safety measures to curb the virus.

Unlike France, which has the lowest levels of trust in vaccines worldwide, 94% of Brazilians recently surveyed by Datafolha support the vaccine and said they are either already vaccinated or intend to be. Only 5% of those surveyed said they haven’t been jabbed and don’t plan to be in the future.

Despite having a head of state who has openly mocked Covid-19 as being no more than a “little flu” and attacked the Pfizer vaccine by jokingly suggesting it could turn people into crocodiles, support for vaccines among Brazilians on both sides of the political spectrum is growing.

“I am here against this government that I consider genocidal,” college professor Adalberto Pessoa Junior told AFP at the protest on Saturday. “[They are] responsible for not purchasing vaccines and many people died [as a result].”

Pessoa Junior’s claim seems to resonate across political lines. Bolsonaro’s failure to implement a coordinated national response to the pandemic and his general disregard for vaccines has been a unifying factor, galvanising the recent protests.

“The centre-right, the centre and the left can all agree that his performance with Covid has been awful,” says professor of Brazilian Studies at King’s College Anthony Pereira. “They’ll disagree on his handling of the economy or the role of the military within the government, but this they can agree on.”

The president is already under investigation for allegedly turning a blind eye to the misuse of government funds when purchasing vaccines and has seen his popularity ratings drop to 24%, the lowest since he took office in 2019.

“Bolsonaro has a knack for creating enemies out of his supporters,” Pereira says. Many Bolsonaro voters who were sympathetic to his discourse on quarantine and lockdowns aren’t necessarily sympathetic to what he says about vaccines, consequently swaying their political opinions, he says.

“If you’re in a favela, you don’t have a signed workers card and you have to sell stuff on the street to make a living and you hear someone say that you should stay home to preserve public health, that person is threatening your livelihood,” Pereira explains, “But vaccines are a way out.”

‘Vaccination is embedded in Brazilian culture’

Brazil enjoys a long history of successful inoculation campaigns, another reason why so many are taking to the streets to demand better vaccine management.

In 1973, during Brazil’s military dictatorship, the National Immunisation Program (PNI) was set up after a successful smallpox vaccination campaign completely eradicated the disease from the country.

Then, in 1986, Ze Gotinha or “Droplet Joe” was created. Considered a national treasure, he is a droplet-shaped mascot and cartoon character invented to reassure children and parents on the safety of the oral polio vaccination. Six years after his creation, polio was eradicated in Brazil. Since then, the country has managed to eradicate tetanus and measles as well.

“Ze Gotinha was the perfect example of a strategic communication campaign,” says director of King’s Brazil Institute Dr. Vinicius Mariano de Carvalho. “He became the public image for inoculation and got into people’s mentalities to such an extent that the portion of Brazilian society that is anti-vaccine today is very small.”

“He reached everyone, even those who were less educated,” he says, insisting that vaccination has become “embedded in Brazilian culture” since inoculation campaigns began back in the 1960s.

But while generations grew up hearing about how vaccines can save lives, things are different this time around. Although the country has long been championed for its public health campaigns, the response to the Covid-19 crisis has been “chaotic”.

“There was no proper, national campaign for the vaccination,” Carvalho says. “The lack of leadership from the ministry of health as well as a failure to distribute the vaccine evenly across all social strata in all Brazilian states caused a massive delay in the rollout.”

Brazil has the second-highest death toll worldwide after the US, exceeding half a million victims in the country so far. So it’s no wonder the government’s negligence has largely been spoken about as being “genocidal” by protesters like Pessoa Junior.

“We need to multiply that number by 10 to understand the impact of Covid deaths on the Brazilian population,” Carvalho says. “For all of those who lost their loved ones, it’s a huge impact on the psyche of a society.”

He believes the death toll is a “very important” determinant when questioning the government’s management of the crisis, especially with regards to its prevention.

Only 18% of the adult Brazilian population has been fully vaccinated, with about 47% having received their first jab. With at least 140 cases of the Delta variant present in the country and some states lacking vaccine doses, the risk of the staggering death toll increasing is inevitable.

Rudy Giuliani, in Miami for Podcast and Protest, Likens Democrats to Castro Regime