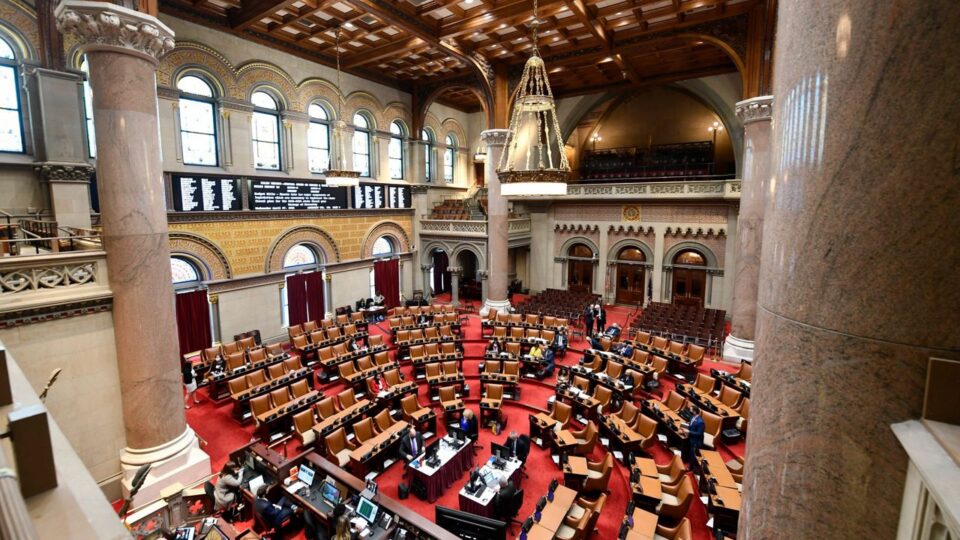 Four months ago, the state Assembly launched an impeachment inquiry into Gov. Andrews Cuomo’s conduct. He faces numerous allegations of sexual harassment, and stands accused of covering up the true number of deaths in nursing homes from COVID-19 in order to sell his memoir, which was published last year.

Right now, the Assembly’s Judiciary Committee is conducting the investigation along with an outside law firm, and it will make a recommendation to the full Assembly when its findings are complete.

But earlier this month, two members of the Judiciary Committee dined with Cuomo at the Executive Mansion in Albany, the governor’s private residence, drawing criticism from Republicans.

“Do you think the U.S. Attorney would have dinner with someone he was prosecuting?” said Nick Langworthy, the state Republican chairman. “These are two legal professionals that work in the court, and who I believe have prosecutorial experience. They know right from wrong. But they got invited to the mansion. And they got starstruck by the governor.”

The two members of the Judiciary Committee are Monica Wallace and Karen McMahon, both of whom are Democrats representing western New York. Langworthy has called on them to step down from the committee.

The dinner with Cuomo happened on June 1. It was with a delegation of elected officials representing Buffalo, and the topic of discussion was local infrastructure.

But sources said Wallace took a tour of the mansion with Cuomo afterwards.

“Absenting myself from an important meeting with my delegation colleagues to discuss critical WNY infrastructure needs would have left my constituents without a voice at the table,” Wallace tweeted, responding to criticism. “This was not a private meeting, and any suggestion that my attendance was improper is just silly.“

Absenting myself from an important meeting with my delegation colleagues to discuss critical WNY infrastructure needs would have left my constituents without a voice at the table. This was not a private meeting, and any suggestion that my attendance was improper is just silly. https://t.co/Cdipkd9aGu

McMahon did not respond to a message left at her office.

They are not the only two legislative members willing to appear alongside Cuomo lately. Assembly members Bill Magnarelli and Al Stirpe flanked Cuomo at an event in Syracuse this week.

“Thank you, governor, for your leadership and partnership,” Magnarelli, a Democrat, said that event. “I look forward to our continued work together in building back a better New York.”

“Thanks to Gov. Cuomo’s leadership, we are almost ready to turn the final chapter on COVID,” said Stirpe, a Democrat.

Many members have opted to appear with Cuomo, even after the impeachment inquiry began.

“Some of my colleagues, who have called on him to resign, then are standing with him at press conferences and meeting with him privately,” said Assemblyman Michael Lawler, a Republican who represents Rockland County, “I just don’t know how you compute allowing that to happen when you believe that the man should resign.”

Stirpe and Magnarelli have not called on Cuomo to resign, but many of their fellow Democrats have, including Senate Majority Leader Andrea Stewart-Cousins, who later also appeared at an event with Cuomo. If the Assembly impeaches Cuomo, he would be tried in the state Senate and removed from office if convicted.

Former Ohio House Speaker Is Expelled After His Indictment : NPR