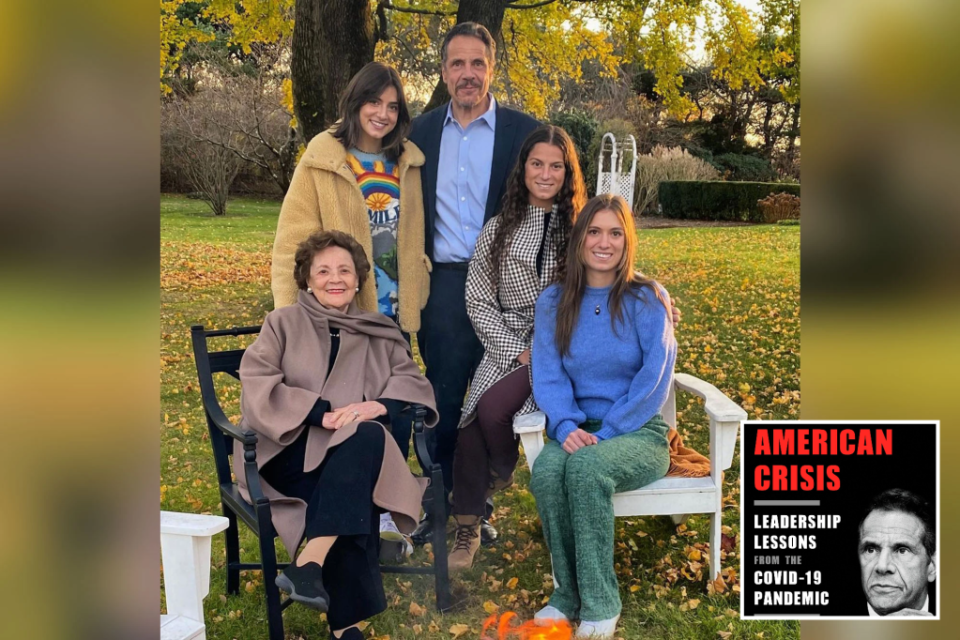 Disgraced ex-Gov. Andrew Cuomo is spending the Thanksgiving holiday with family — apparently in relaxation mode following a rough week including the release of the state Assembly’s damning impeachment report that showed he used state resources to write and prep his $5.1 million pandemic-era memoir “American Crisis.”

“Today and everyday, I’m thankful for my girls Cara, Mariah & Michaela and for our family’s rock, my mom, Matilda Raffa Cuomo,” the former pol tweeted Thursday evening, along with a photo of himself surrounded by daughters Mariah Kennedy-Cuomo, 26, Cara Kennedy-Cuomo, 26 and Michaela Kennedy-Cuomo, 24 as well as his mother, Matilda Cuomo, 90.

“From our family to yours, Happy Thanksgiving.”

A spokesman for the ex-governor would not say where Cuomo was spending his evening.

The former pol faced scathing new findings revealed Monday in the Assembly’s nearly nine month probe, including new information detailing allegations that he sexually harassed 12 women, hid the true count of nursing home deaths related to COVID-19 with the help of his top aides and used state property and staffers to write his book.

Assembly investigators discovered Cuomo had 70,000 words written by July 1, 2020 — just three months into the coronavirus crisis — of a manuscript that turned into “American Crisis: Leadership Lessons From the COVID-19 Pandemic.”

It’s just the latest in damaging revelations since Cuomo resigned from office in August following the release of a bombshell sexual harassment report on Aug. 3 by state Attorney General Letitia James’ office.

Since moving out of the Albany Executive Mansion and storing some belongings at his sister’s Westchester mansion, the former Democratic governor has been spotted fishing on a mini boat with his Siberian husky mix pup, Captain.

Former Team Cuomo members also posted online in an apparent attempt to show all’s well: ex-top aide Melissa De Rosa tweeted a smiling picture of herself in a brightly lit kitchen holding a spoon, perhaps ahead of enjoying her own Thanksgiving meal.

De Rosa was mentioned by several women interviewed by James’ office as part of her sexual harassment invesigation and recently published online in transcript form.

“Trooper #1” — one of the women who accused Cuomo of sexual misconduct — described a story she heard from a superior, where the ex-gov and DeRosa were allegedly spotted “making out on the sidewalk like high schoolers.”

Although the AG’s office blacked out DeRosa’s name in the 143-page testimony, sources identified her as the alleged canoodler referenced by the Trooper.

Both Cuomo and DeRosa have previously denied the account.

Cuomo meanwhile is expected to be arraigned in Albany City Court on Jan. 7, 2022 for a misdemeanor forcible touching charge following the filing of a criminal complaint by Brittany Commisso, the state worker who accused him of groping her in the mansion last year.