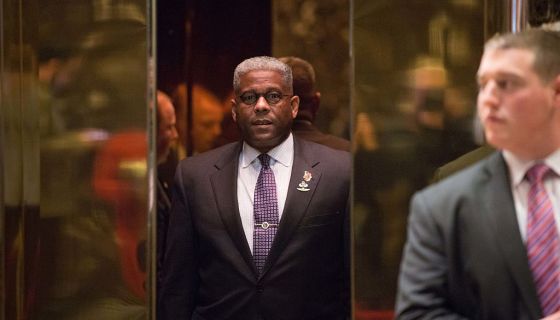 A Black Republican and former U.S. Congressman who is among the QAnon conspiracy theorists who believe Donald Trump was the victim of election fraud is set to leave his post of leading the GOP in Texas to reportedly consider a run for governor next year.

Allen West, who represented Florida in Congress for one term and unsuccessfully tried to get the first Black president impeached, will be stepping down as chairman of the Texas Republican Party on Friday, less than a year after assuming the position. He said it was his “distinct honor to serve as Chairman of the Republican Party of Texas.”

A press release put out by the Republican Party of Texas didn’t make any mention of what will be coming next for West, but the Dallas Morning News reported that there is “speculation that he may challenge Gov. Greg Abbott in the primary.”

West, a retired Army colonel who was once charged with using some of the harshest interrogation tactics in Iraq and described the coronavirus pandemic guidelines as “tyranny,” has been an outspoken critic of the way Abbot has handled the pandemic. Just last year, West appeared at the Texas Freedom Rally, where he led a caravan of motorcycles and cars from Dallas to Austin in a protest that was held with the purposes of “securing our civil liberties, defending the constitution, and making sure Texas is open for business,” according to a press release about the event. During the rally, West was injured after his motorcycle crashed.

West was also recently attended a conference in Dallas that the Texas Tribune described as having “ties to the QAnon conspiracy theory movement, where a former Trump administration official advocated for a military coup on the U.S. government.” He spoke during the “For God & Country Patriot Roundup” event that included former National Security Adviser Michael Flynn claiming Trump could be reinstated as president by the summer if a coup d’etat takes place.

West’s attendance suggests he, like QAnon followers, believes the debunked conspiracy theory that Trump is the legitimate president who was defrauded out of the White House by a rigged election. West has also previously been linked to QAnon, including using the group’s bottom, “We are the storm,” for the Teas Republican Party when he first took leadership of the organization.

To be sure, West is also a former Army colonel who was all but forced to retire in 2004 after he was charged with assaulting an Iraqi. The Nation reminded readers of how “West let the soldiers under his command beat the Iraqi man, whom West believed was involved in an attempt on his life. (No evidence was ever found implicating the man). Then, he staged a mock execution.”

Fred Wellman, of the Lincoln Project political action committee, described West in a tweet as “a war criminal.”

As far as his political career goes, West has never kept it a secret how much he resents Barack Obama, who was already the president when West won his congressional election in 2010. Citing the infamous prisoner swap with the Taliban that freed U.S. Army Sgt. Bowe Bergdahl, West called for Obama to be impeached in 2014.

“Obama’s breaking of the law in this case presents serious national security concerns — for all Americans,” West said at the time. “This is aiding and abetting the enemy, which goes along with the collusion of this administration with Muslim Brotherhood-affiliated organizations and supplying weapons and arms to Islamists.”

If West does declare his gubernatorial candidacy, it’s doubtful he’ll win if the Republican Party’s blind loyalty to Trump is any indication. Trump on Tuesday endorsed Abbot’s bid for re-election.

Jair Bolsonaro is facing a political reckoning in Brazil. How far will it go?