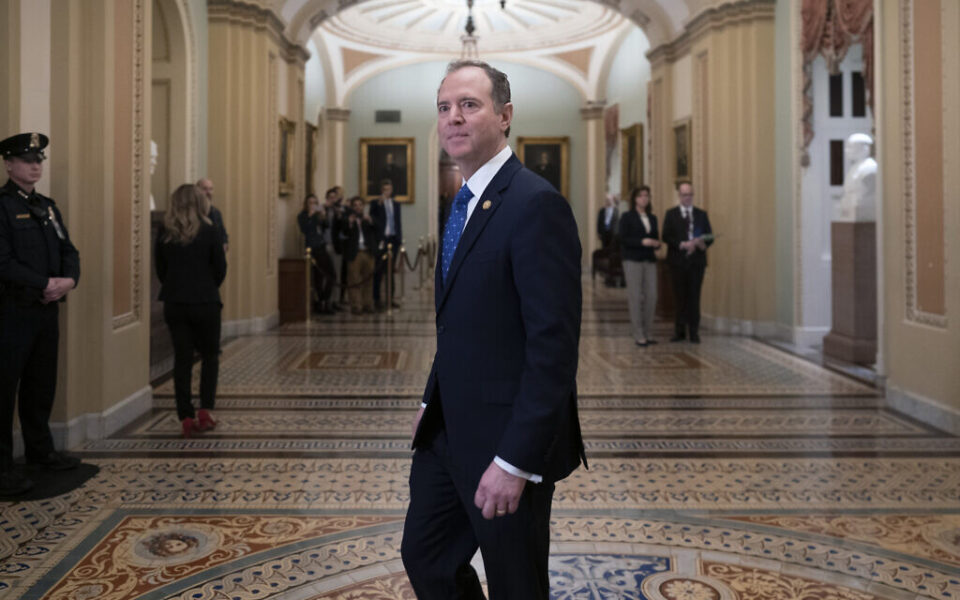 JTA — During the past week, Rep. Adam Schiff’s opponent falsely accused him of being related to George Soros, the Jewish mega-donor to the Democratic Party who is a constant target of right-wing criticism.

In an interview with the Jewish Telegraphic Agency, Schiff said the Soros meme fit into a pattern of bigotry condoned by the very top of the Republican party. Schiff accused not only US President Donald Trump but Republican congressional leaders of encouraging anti-Semitism through criticism of Soros, which has become unrelenting in this election cycle and frequently veers into anti-Semitism.

Schiff, the Jewish Democratic congressman from California who led the House’s impeachment inquiry of Trump last year, also floated the idea of Congress removing legal immunity from social networks that fail to crack down on hate if their recent steps to curb bigotry prove insufficient.

In 2018, McCarthy, the House Republican leader, posted a tweet reading “We cannot allow Soros, Steyer and Bloomberg to BUY this election!” referencing three donors with Jewish heritage. That same year, Scalise, a Republican congressman from Louisiana who serves as minority whip, blamed “radical, Soros-backed elements of the Democratic Party” for violence against Republicans.

While progressive Jewish activists have openly accused McCarthy and Scalise of spreading anti-Semitism, Schiff’s charge is “highly unusual” coming from a senior Democratic congressman, according to Steve Rabinowitz, a longtime Jewish Democratic strategist who said he agrees with Schiff’s assessment. Schiff chairs the House Intelligence Committee.

McCarthy and Scalise have both denied that they are anti-Semitic. In 2019, McCarthy said on Fox News that his tweet “had nothing to do about faith; that was about Republicans versus Democrats.” Scalise’s spokesperson told JTA that, especially as a past victim of a politically motivated shooting, it is “absurd” to accuse him of anti-Semitism.

McCarthy’s office did not respond to a JTA request for comment.

“Scalise is a victim of political violence himself; it is absurd and offensive to accuse him of engaging in that behavior,” the spokesperson said. “George Soros is a known leftist; that has nothing to do with him also being Jewish. Scalise has long been outspoken against anti-Semitism in any form, and is a longtime ally of the Jewish community. To suggest anything to the contrary is ridiculous.”

Schiff, who has represented a Los Angeles County congressional district since 2001, is considered a shoo-in to keep his seat in his heavily Democratic district. But his challenger, Eric Early, is drawing on a playbook that has made their race a West Coast version of the race between an establishment Democrat and inflammatory Republican that’s rattling South Florida right now. There, as in Schiff’s district, both contenders are Jewish, with the Republican insurgent unafraid to make personal and sometimes false accusations about the Democrat they are looking to unseat. 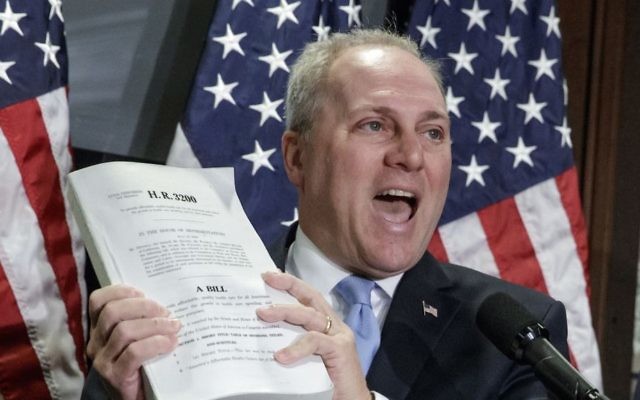 Speaking to JTA, Early, a lawyer, rejected the notion that his rhetoric about Soros was anti-Semitic, and said criticism of Soros should not be out of bounds. In a tweet this week, he also called Soros, a Holocaust survivor, a “Nazi sympathizer.” Some of Soros’ critics falsely allege that he aided the Nazis, when he was in fact being hidden from them under a fake name as a child.

Early, who is Jewish, said he had drawn conclusions about Soros based on his own research.

“That’s what I’ve heard and read over the years, and that’s all I will say about it,” he said. “I don’t know what Mr. Soros was doing during the Holocaust. The Holocaust was one of the most terrible events in human history, and I don’t know what he was doing but I certainly have read a lot about what he’s been accused of during that time.”

Early said he believed that anti-Semitism in the United States was primarily emanating from the anti-Israel left, and specifically called out “The Squad,” a group of four progressive freshman Democratic representatives, including two who vocally support boycotting Israel. Early claimed that The Squad, which has a high profile but little institutional power, controls the Democratic Party. 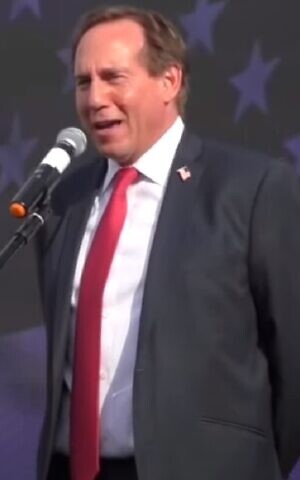 He also claimed, falsely, that Schiff has not criticized anti-Israel statements from the Democratic Party. In fact, when Rep. Ilhan Omar suggested last year that AIPAC pays congressmen to be pro-Israel, Schiff did call on Omar to apologize and said he was “deeply dismayed” by her comments. Omar apologized following similar calls from across Congress.

“The Democrat Party right now is literally being controlled by the Squad members,” Early said. “You have a huge group growing in the Democrat caucus and behind the scenes of the Democrat Party that are tremendously anti-Semitic and frankly want to see Israel wiped off the face of the map.”

The Anti-Defamation League and the Department of Homeland Security say that the biggest anti-Semitic threat in the United States comes from the far right and white supremacists, whom a recent DHS report called the “most persistent and lethal” domestic terror threat in the country.

Schiff said he wants to ensure that the government pays more attention to domestic threats from white supremacists. Like a range of government officials and security analysts, Schiff worries that violence could result if there’s doubt as to the result of the vote.

“We’ve already seen militias take matters into their own hands,” he said. “You have a plot to kidnap the governor of Michigan. It’s all too easy to see a chaotic and potentially violent aftermath given that we have such an unscrupulous president who would be willing to egg it on.”

(This week, Trump turned his attention again to Schiff, saying on Fox News on Tuesday that Schiff was a “sick man” who should be investigated and “ought to be put away.”) 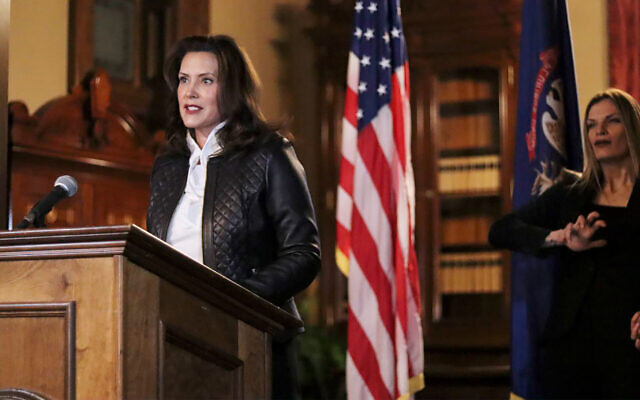 Michigan Gov. Gretchen Whitmer addresses the state during a speech in Lansing, Michigan, Oct. 8, 2020. (Michigan Office of the Governor via AP)

Schiff also said Congress needs to focus on holding tech platforms accountable for the hate published on their platforms. His comments come soon after Facebook, Twitter and YouTube announced a series of steps to crack down on Holocaust denial, hate speech, and the QAnon conspiracy theory, which has anti-Semitic overtones.

Schiff said that should those steps not prove effective, Congress should think about changing the law that absolves social media companies of responsibility for most illegal content published on their platforms, including considering “whether to limit that immunity to platforms that are not amplifying or setting their algorithms to amplify extreme content.”

Schiff made similar comments in 2019, well before the social networks’ recent actions to curb hate.

Like other Democrats, Schiff accused Trump of condoning and encouraging anti-Semitism due to his rhetoric and his repeated declining to condemn white supremacists and conspiracy theories. He said Trump “is normalizing and weaponizing bigotry and anti-Semitism in all its various forms.”

The president’s defenders reject that claim, pointing to his record on Israel and the times he has condemned white supremacists. Vice President Mike Pence said at the vice presidential debate this month that Trump “condemned the KKK, neo-Nazis and white supremacists and has done so repeatedly. Your concern that he doesn’t condemn neo-Nazis — President Trump has Jewish grandchildren. This is a president who respects and cherishes all of the American people.”

But Schiff said that even if Trump is defeated on Nov. 3, he still expects anti-Semitism to pose a threat in the United States.

“I expect it to persist but I also expect it to decline,” he said. “It doesn’t mean that anti-Semitism is going to go away when Donald Trump goes away, or other forms of bigotry, but it won’t have the same accelerant. Donald Trump is the fuel to the fires of anti-Semitism and hate, and his removal will appreciably help the situation.”

NHGOP Chair Condemns ‘Talk of Impeachment’ By Some Reps Upset With Mask...

Opinion: The only way Republicans can lead again