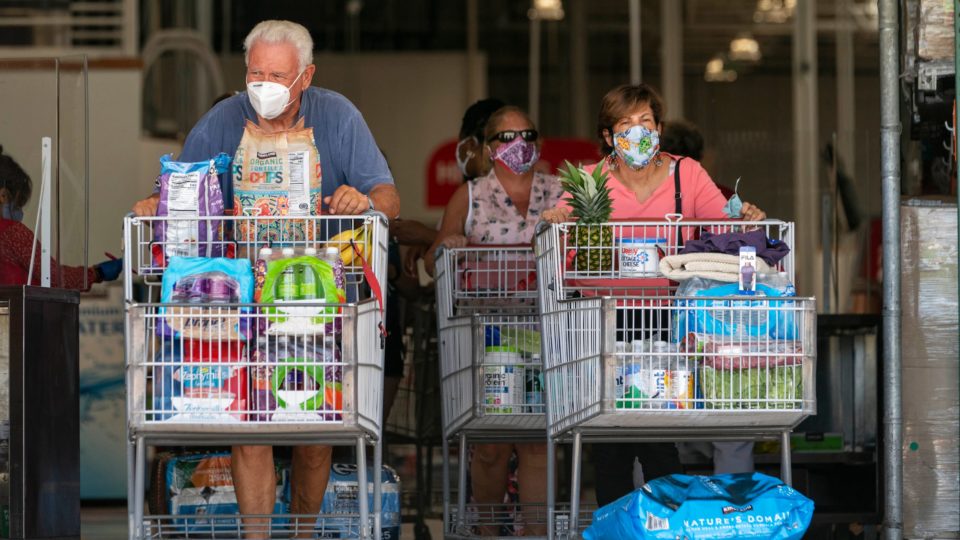 Escalating tensions with Beijing, President Donald Trump threatened Friday to ban TikTok from operating in the U.S. over concerns about the social media platform’s ties with China. Trump said he could use emergency economic powers or an executive order to ban the Chinese-owned company from the U.S. as soon as Saturday. Trump’s threat comes as the administration is investigating whether the app’s parent company, ByteDance, is harvesting the data of millions of American users. The president has benefited from social media platforms, but he has also chastised those companies, accusing their executives of squelching conservative voices on their platforms. The announcement also comes weeks after Trump critics used TikTok to inflate expectations for turnout expected at the president’s rally in Tulsa, Oklahoma, a major embarrassment for the president’s campaign.

The United States has never delayed an election, even during the Civil War and World War II.

Hurricane Isaias moves toward the Bahamas and Florida

In an advisory released early Saturday morning, the National Hurricane Center said Hurricane Isaias is forecast to move near or over the Central Bahamas Saturday morning, near or over the Northwestern Bahamas Saturday and near the east coast of the Florida peninsula Saturday afternoon through Sunday. The east coast of Florida is in the forecast path of the storm and some models show the eye coming ashore or brushing the coast, according to the Florida Public Radio Emergency Network. Strong winds and heavy rain, along with dangerous beach conditions, are possible along the coast over the weekend, according to the National Weather Service, Melbourne. It is worth noting earlier forecasts that Isaias could become a Category 2 hurricane Saturday have been revised. Winds are now forecast to reach 90 mph by the time it approaches Florida, which is Category 1 strength.

Target and Gap brand stores, including Old Navy and Banana Republic, will start requiring masks Saturday. McDonald’s will also require customers to wear masks or face coverings when entering its 14,000 restaurants nationwide starting Saturday. Retailers requiring masks isn’t new – especially in areas with local orders – but few businesses have embraced mandates until recently. Shoppers have been required to wear masks to enter Costco and Apple stores across the nation since early May.

The retirement of Lt. Col. Alexander Vindman, a key figure in the impeachment of President Donald Trump, becomes official Saturday. In a statement July 8, a day after he submitted his retirement request, Vindman cited “bullying, intimidation and retaliation” from the White House for his decision to retire, according to a statement from his lawyer David Pressman. Vindman, an Iraq war veteran and Purple Heart recipient, will retire at the lower rank of lieutenant colonel, according to the Army, after a hold-up on his assignment as colonel that some viewed as retaliation for his impeachment testimony.

Lt. Col. Alexander Vindman, who had been fired from his job at the National Security Council, is retiring from the Army citing ‘bullying’ from Trump.

The quest for the Stanley Cup resumes Saturday as the NHL sets up shop with a 24-team tournament in secure hubs in Toronto (Eastern Conference) and Edmonton (Western Conference). A best-of-five qualification-round matchup between the Carolina Hurricanes and the New York Rangers will kick off the restarted season at noon ET Saturday and the first day will feature five games. Playoff predictions are difficult enough in normal years. This year is even harder because of all the variables as the league plays amid the coronavirus pandemic. There are eight additional teams, one additional round, no fans in the arenas and 4½ months of rust to shake off, all while trying to keep COVID-19 from disrupting the tournament. Here is our best effort to sort through the unusual circumstances and try to predict winners.

SportsPulse: Mackenzie Salmon provides an in-depth breakdown of the NHL’s new plan to return to action which includes a 24-team tournament leading up to the Stanley Cup Finals.

Everything we suspected about Donald Trump has come true

Opinion | Donald McGahn’s testimony would be better late than never