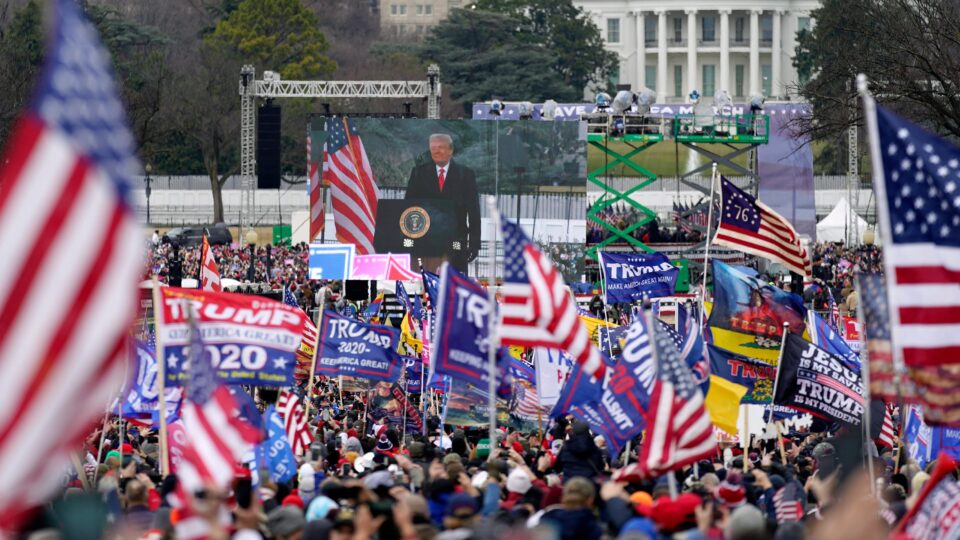 The FBI releases new videos and photos of the most violent rioters from the January 6 attack on the U.S. Capitol.

WASHINGTON — Ten Democratic members of Congress have joined in a federal lawsuit accusing former President Donald Trump of inciting the deadly Jan. 6 insurrection at the U.S. Capitol and of conspiring with his lawyer Rudy Giuliani to prevent the Senate from certifying the results of the presidential election he lost to President Joe Biden.

Similar to the case made by the House impeachment managers in the Trump’s second impeachment trial, the lawsuit bases its claim on the actions made by Trump in the weeks and months leading up to the riot. Trump’s defense team said he was exercising his right to political speech, and Trump was acquitted.

The following lawmakers announced Wednesday they were joining the suit originally filed in February by the NAACP and Rep. Bennie Thompson, D-Miss., who is the chair of the House Homeland Security Committee:

The NAACP said in a statement that the lawmakers seeking to join the suit were personally impacted by the Jan. 6 riot, and the amended lawsuit includes details that each member of Congress experienced on that day at the Capitol.

Lawmakers narrowly escaped the violence at the Capitol, the lawsuit claims, and feared for their lives. The newly revised suit alleges some lawmakers considered their deaths, and that some were also exposed to a higher risk of contracting COVID-19 as they hid from the rioters.

5 DIED: Causes of death at Capitol riot released for four

“Representative Cohen began to contemplate where he would want to be buried. Once back in his office, he grabbed a baseball bat for protection as he sat in the dark for several hours,” the suit alleges.

The lawmakers said that Trump’s words and actions pushing his baseless theory of election fraud in the time leading up to the riot incited his followers to their actions that day.

“We must send a clear message to Donald Trump and everyone involved in inciting, planning, and carrying out the insurrection that there will be full accountability and justice for this lethal attack targeted at preventing us from doing our job,” Jayapal said.

Members of Congress became emotional as they shared their stories of the day that rioters stormed the U.S. Capitol.

POST-JAN. 6:What AOC said about trauma

The suit was filed under a law known as the Ku Klux Klan Act, which originates from the Reconstruction era and was passed “in response to KKK violence and intimidation preventing Members of Congress in the South during Reconstruction from carrying out their constitutional duties. The statute was intended specifically to protect against conspiracies” according to the NAACP.

The lawsuit is directed at Trump in his personal capacity as an individual, rather than in his capacity as president when the alleged incitement took place. Though Trump was acquitted in the Senate, lawmakers including some Republicans like Sen. Mitch McConnell, R-Ky., have voiced support for pursuing action against Trump in a court of law.

A statement by the NAACP quotes McConnell in his speech following Trump’s acquittal this month in the Senate impeachment trial over the same issue: “We have a criminal justice system in this country. We have civil litigation. And former presidents are not immune from being accountable by either one.”

What to watch for now that Trump is out of office: Donald Trump faces legal challenges well beyond the Capitol riots

“There is no question that the mob’s unlawful actions — their brutal, anti-Democratic attack against the very seat of our democracy — interfered with my ability to exercise my constitutional responsibility of certifying the 2020 presidential election,” Nadler said in a statement. “Those responsible for placing me and my colleagues in danger must face accountability for their criminality.”

The Unheralded Story of Rep. Alcee Hastings’ Impeachment and an FBI Whistleblower